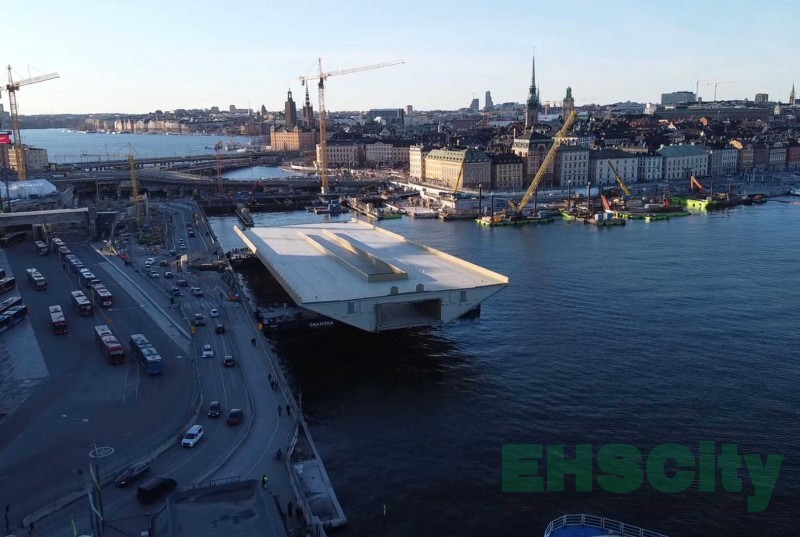 Ramboll’s bridge unit in Luleå was part of the group working on the bridge. If you are interested in knowing how the gold-coloured and wedge-shaped bridge was designed, the following text, written by Victor Vestman, one of the constructors of the bridge, may be of interest.

The New Bridge over Söderström – a Technical Description.

The new bridge over Söderström by Slussen in Stockholm covers an area as big as a football field and has a total steel weight of 3400 tonnes. Commissioned by Skanska and Stockholm City, Ramboll has for several years been planning the bridge which is to play a central role in the new Slussen; the area is to remain an important hub of communications as well as meeting place. The work on the bridge has taken almost five years, covering design, calculations, workshop drawings  and additional project planning, including transportation and construction.     Being 140 metres long and 45 metres wide, the bridge has lanes for walking, cycling as well as public and road traffic. It extends from Skeppsbrokajen in Gamla Stan to Katarina Lift on Södermalm and has a slip road to Stadgårdsleden. To make this possible, the cross-sectional height of the bridge on the Södermalm-side is about eight metres and about one metre in height on the Gamla Stan-side. The geometry of the bridge is rather special in appearance with varying inclination of the sides of the bridge, making each cross-section unique.

A Steel Bridge with diaphragms

The bridge is built entirely of steel, and the carriageway is designed as an orthotropic deck with a coated and waterproof steel rail surface. Since no stabilising concrete deck is part of the construction, the bridge consists of a number of longitudinal webs that distribute the robustness of the wide rail surface. Crosswise, the bridge has diaphragms with a centre-to-centre distance of about 3.5 metres. At the lower parts of the bridge, diaphragms consisting of whole plates have been used. At the higher cross-sections of the bridge, the diaphragms have been designed as frames between the web plates except for the part adjacent to the supports and the roof of the ramp. The decision to divide diaphragms and webs was not made entirely from a sustainability perspective, but also with the intended manufacturing method in mind.  Since the beginning of the project, dividing the bridge into so-called segments, or engineering units, was discussed. The division made it possible to be open to various manufacturing methods of the workshops. This meant that each segment of the bridge was transportable on regular road network, resulting in restrictions in height, width, length and weight. The bridge, however, was not to have too many interaction welds from an aesthetic perspective.

Division of bridge segments, rules of procedure as well as limitations faced at the time were discussed early in the planning. For instance, the cross-sectional heights for the bridge segments closet to the northern abutment restricted the access for the workshop workers. The bridge is divided into eight longitudinal segments (numbered 1 to 8), and these segments are divided into eight additional parts (A to H). Since the slip road to Stadsgårdsleden is designed with a roof, the total of bridge segment passes just over 70.
Transported in One Piece

Various transport options for the mounting of the bridge were, likewise, an issue discussed early on. The best solution for the installation of the bridge was to transport it in one piece via Saltsjön. This involved less welding work on site, and a large part of the paintwork could be carried out in the workshop. It was decided that the bridge was to be sailed in using barges. The chosen methods for transportation and assembly required lifting the bridge on to two barges. The barges were then towed and secured to the transport vessel whose deck can be lowered below the water surface. The added water was, then, discharged into ballast tanks, and the bridge began its almost 7-week journey to Stockholm and Stadsgårdskajen. once in Stockholm, the ship was lowered, and the barges and the bridge were towed in for assembly.